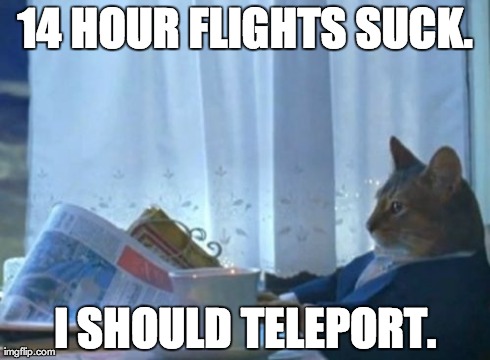 Of course what I mean by that is, we really really wanted to be able to sleep SOMETIME throughout the course of our 14 hour flight and we haven’t had awesome luck doing that in economy.  Plus we were really behind on work and it turns out first class really does accommodate work better.  Drew just wrote a post outlining a few other reasons for our Cathay first class flight here.

That’s a difference of 65,000 miles.  We paid 65,000 miles for the chance to sleep well and get work done.  I was grateful for that since we had a ton of work to catch up on, but of course…unnecessary and not even sure it was worth it, despite how enjoyable it was.

Just for fun and since my defense mechanism is to mock myself before someone else can, here are some other flights we could have gotten with those 65,000 AA miles, keeping in mind that there are two of us.  (I’m basically just using American Airline’s award chart to window shop a little.)

What else could we have done with 65K AA miles?

Practical application: I fly solo from the States to Germany to visit my friend then return “home” to the US.  Or, Drew and I fly one-way to Europe and make our plans for return later, as we did last year. 🙂

Practical application: Drew and I both fly out to Boulder CO to visit our friends, then return to the VA area.  Then, I fly solo to Ohio to visit my family.

3.) Two one way tickets from NA to the Southern countries of South America, or one roundtrip (60K).

Practical application: Drew and I both fly from the States to Brazil or Argentina or something, and make our plans for return later.  Or, one of us does a roundtrip from US to Brazil and back.  Unlikely.

Ok now let’s consider the places we could have gone from South East Asia, where we happened to be at the time.  So now we’re taking into account the actual scenario we were in, which is that we were basically starting in Bangkok and needed to be in the States by the end of the month.

**Drew is speaking at a “DO” in Ann Arbor this weekend so for any of the below hypothetical tickets that wouldn’t land us back in the states, we’d need to acknowledge an extra cost in miles or money from somewhere to then get us back to the States.

Practical application: Drew and I fly from Bangkok to Oman to see Petra.  Then we fly to Israel, one of us via the AA one-way, and one of us via another way.
**Plus whatever solution we found for the other one-way to Israel, AND plus whatever solution we found for returning to the States from Israel. (For example an extra 17.5K AA miles for the one way to Israel and an extra 90K AA miles for two one ways from Israel to the States, for a total of 107.5K AA miles).

Practical application: Drew and I fly from Bangkok to ANYWHERE IN AFRICA!  Seeing as we’ve only seen Pilanesburg and Johannesburg, we’d be wide open for suggestions in this little hypothetical.  Of course, then we’d need to spend more in miles or money to get back home to the States.
**Plus whatever solution we found fro returning to the States from Africa. (For example, plus an additional 75K AA miles for two one ways from Africa to the States.)

ALL THIS TO SAY, 65,000 AA miles can either be a nice little trip of its own, or can contribute significantly to a bigger trip.  Given the situation we were in, our best use would have been saving it for Europe later or saving it for Intra-US trips.  (Or Intra Europe trips later).

Plus, imagine if we regularly chose first class flights over economy flights.  If we had flown first class to South East Asia from the US as well as back, we would be out another 65,000 AA miles.  And so on and so on.

The thing is, the long haul flights are the flights that are really tempting for upgrading to first or business class.  But, those are also the flights that are going to suck up the miles for an entire extra trip, just in excess from economy.  And that kind of excess spending accumulates quickly.  If we flew that way, we would be reaching a lot fewer locations.

So in the beginning of the post I said that we paid 65,000 AA miles for the chance to sleep and work.  But you can also think of it this way: we sacrificed a trip to Brazil so that we cold sleep well and work on our flight.  Since when does a bed cost the same as a trip to Brazil?  When you’re talking about beds in the air, it’s true.  They’ll cost you a trip to Brazil.

You know what I mean.

← My favorite “no-star” travel experiences
Can we do better than an average of $23.18 per day for a rental car? →